The friendly invitation to have a meal at the home of Sigrid Gareis (together with Gabrielle Brandstätter) led to political discussions. I could and would not participate in the particulars, but felt that pessimism about the return of fascism overlooked some positive items. Today was not a replay of Weimar. Since 70 years West Germans had lived within the framework of an enlightened Grundgesetz (constitution) that worked. So far no militarisation had emerged of political parties, with uniforms and street terror. As a capitalist society Germany had managed to retain a sense that the state was there to correct capitalist errors and had created social security.

I was politely listened to but did not convince. From Sigrid I took with me some stickers. They say: HIER WURDE 1 NAZISTICKER UBERKLEBT! In the left-hand corner of the black and red postcard-size sticker is a fist hammering a swastika. Emotions run deep. Action is needed. 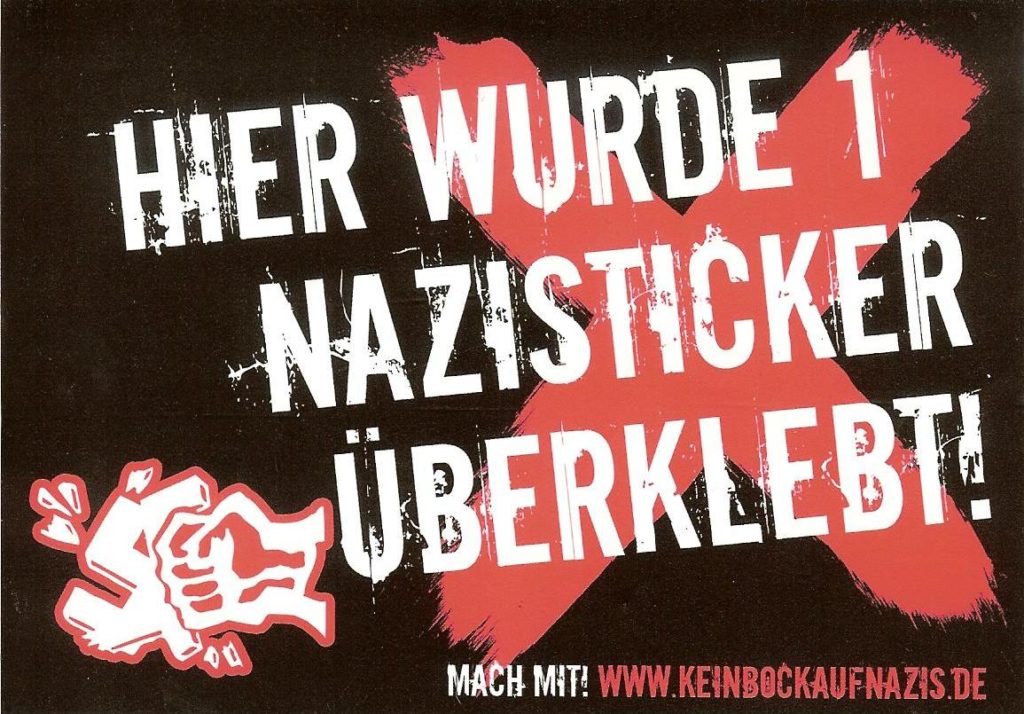 On 29 September we visited the Akademie der Künste, a new building very unlike the teargas filled premises I remembered from the sixties, when battles were fought between students and the police in classrooms. I picked up an official publication (Journal der Künste) which impressed me by its overtly political stance for democracy. I found within it a speech by Christian Bommarius, winner of the Heinrich Mann Preis of the same academy in 2018. He is a journalist and legal expert, and has just published a book about 1949, Das lange deutsche Jahr.

From the speech I take away the distinction between Deutschland and the Bundesrepublik. The first one is still impregnated by hatred of the other, migrants, Jews, homosexuals, and the second one shows a new identity through Einbürgerung into a virtual constitutional frame. The Germans had to become Bundesbúrger after 1949. He calls this Alternative zu Deutschland.

I find this tactically problematic. By highlighting the division between a bottom-up German identity and top down constitutional citizenship, he perhaps tells the truth, but also weakens his position. I hear an echo of Habermas’ views there. Democracy is the only road forward. Elections are the only tool.

I have to accept however the problem that for 70 years this constitution has worked for the West Germans, but was not habitual to the East, and is only one generation young for them. Perhaps Bommarius does avoid this division between Ossies and Wessies on purpose?