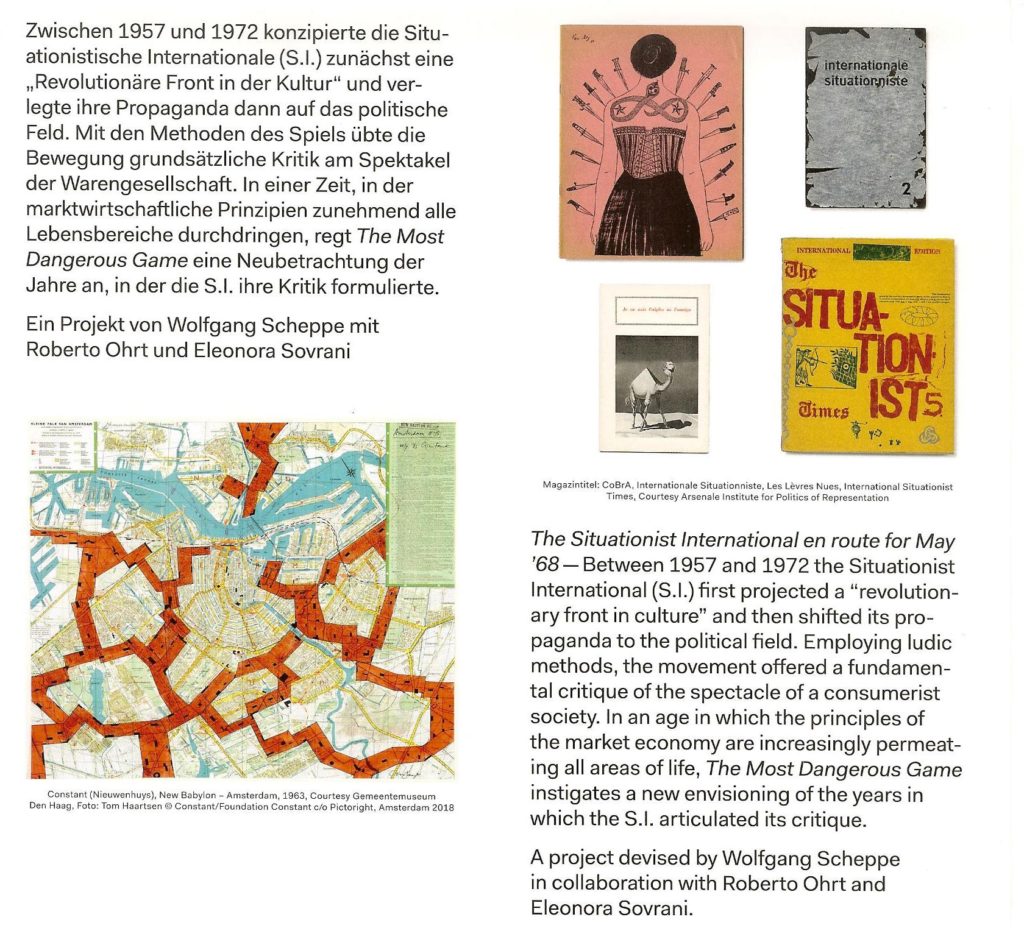 Though it was remarkable to see all those publications together and again, some of them connected with Provo, with the help of a Venetian collector, I felt a strange awkwardness hanging around this show. Perhaps it was just the lapse of time, two generations after I had been part of this development, not the movement, in Holland. Those pamphlets, broadsheets, even books, those photographs and letters were still so familiar, and were now resurrected in the glare of academic curiosity. What had been alive, now seemed dead, what had been a series of events, now crystallized into a network. An impenetrable book accompanied the show, and was happily taken away from us rather abruptly at the exit.

KS had been invited to dine with the director (B.S.) and we sat around drinking, waiting for him to appear from the crowd. I could not connect this gathering of slick Germans with the flower-power atmosphere of the sixties or with the Provos of the Lieverdje happenings of ’66. Only one woman seemed different. She shuffled among the guests as if in search of someone or something lost. I said to KS that she was the only one here that seemed from those times and wondered if it could be Jacqueline de Jong.

We were dining at Kaffee Einstein when this woman reappeared. Berndt, the director, rose and introduced us. It was indeed Jacqueline de Jong, co-signer of the Manifeste Situationniste. At that time she had been living as an artist in Paris and I had never met her. I knew people like Vinkenoog who had strong connections with this scene in Paris, and many of the Provos, of whom one, Bernard (Willem) Holtrop, had moved to Paris and also made his name there as “Willem” the cartoonist. He had escaped the massacre of Charlie Hebdo. So I was very happy to see her at last.

In a sense we hit off well, she the bohemian and I the diplomat (as she called me) connected by common memories. She told me she hated to sleep alone after the death of her husband. She quarrelled with KS, generous soul, who was supplying her with booze. He thought her a bitch. She stood up and made a short speech in perfect German, she spoke her languages. She had come from Hamburg with two drivers, one for the night and one for the day, she said. A lively presence.

At the time I had the feeling that the Provo movement was more artistic than political, and had become only political when their Witte Plannen were confronted by negative politics. I regretted that their playful (“ludiek” was the word) presence was bereft of its enchantment by leftwing ideologues. They were forgotten in their primary intent, as most artists, after the developments of ’68 in Paris, and the dictatorship in Cuba and the war in Vietnam en the CIA and Chile and Pinochet and so on. Jacqueline was thrown out of the Situationists, Constant started to paint again, only Willem continued to crusade with his pen.