Yesterday, at the evening meal in a new Italian restaurant over here, I talked for a while with a 21 years old waitress with a pronounced American accent. She is studying Dutch culture here, language and literature. When I asked her where she was born, she said Poznan, Poland.  So globalisation again.

I mentioned to her that in Gdansk, at the Solidarnosz Memorial, an acquaintance of mine, the poet Czeslaw Milosz, had been quoted with the line: “ give my people peace ”. Though he must have been two or even more generation her senior, she knew of Czeslaw and said she admired him. He was one of her heroes.

I reflected that this snippet of afterlife did him more justice than what Czeslaw got from his children. He told me once that when he received the Nobel Prize, his children were astounded. They had not known that their father, writing in an obscure language, was a world class poet. They were interested in computers he said, and fully Americanized. Even if this were mainly untrue and only a self deprecating observation, I felt something of the true Czeslaw was in there. It was this feeling of loss, loss of language, loss of culture, the sadness of the migrant.

It brought back a dinner we had together in the impersonal gloom of the Groothandelsgebouw in Rotterdam. We had been eating and drinking for some time when he started to reminisce about his motherland, Lithuania. It meant another lost home. I think the family had been landed gentry there, as the main impression I got was of  Lithuania’s vast forests and great lakes and rivers. He drew me into his description of long wet afternoons at dusk, with rain or mist or snow. The dark past stood over us in melancholy, a background without hope. But still something to be part of and longed for.

I had mainly invited him as the author of the Captive Mind, a book I had admired in my student days in the fifties. But we did not speak about politics when we met, as they seemed trivial compared with the metaphysical drift of his thinking. In a way, when after a political upheaval he wished Poland to be given peace, it also meant peace from politics.

When I went home after having spoken to the Polish waitress in the Italian restaurant, I rummaged among the volumes in my poetry library. I found several books and documents, also the anthology by Kenneth Rexroth of Milosz poems. This book I remembered had been given by Milosz to me. But I had completely disregarded the dedication in his small neat handwriting:

After all those years, he still felt close. 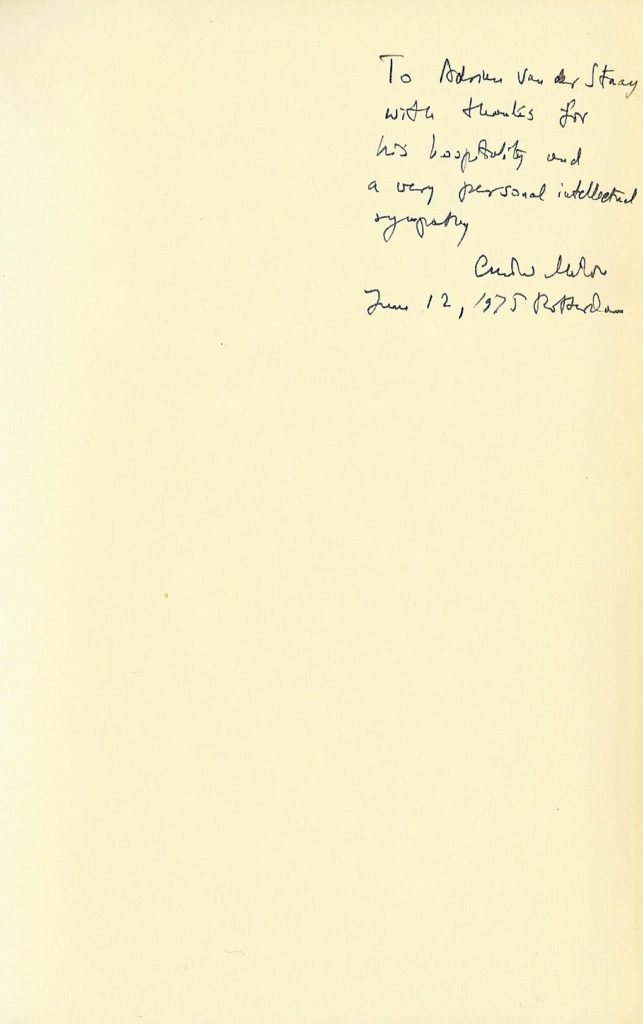